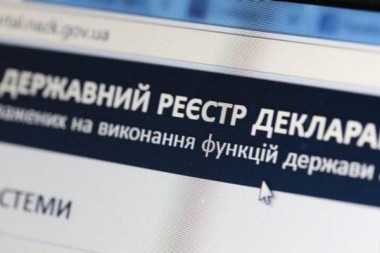 Two-and-a-half years ago, one of the core demands of the Euro-Maidan protests was curbing corruption. In 2014, the new reform government chose the fight against corruption as one of its strategic priorities.

At that pivotal moment, UNDP was honoured and proud to stand by Ukraine’s drivers of reform.  Globally, in all the 140 or more countries where the United Nations Development Programme has its presence, we are working hand in hand with governments to help them solve issues and challenges that lead to effective democratic governance.

This time with the backing of the Government of Denmark, UNDP in Ukraine was able to render expert advice and financial assistance to help implement the reforms that were being charted out.

A new Anti-Corruption Strategy was adopted an enshrined in legislation that included the creation of a number of new institutions and mechanisms. Among the new anti-corruption tools UNDP was asked to help nurture, was the electronic asset declaration system.

The ambition of Ukrainian legislators at the time was to achieve a qualitative difference to earlier, largely ineffective anti-corruption tools and institutions. For such instruments to enjoy the trust and confidence of the wider public, they would have to significantly advance from earlier attempts that had been found to contain numerous loopholes and were largely considered ineffective.

In order for Ukraine’s new anti-corruption measures to gain the trust of both the population and its key international partners, they would have to be serious, ambitious and effective. Asset declarations are an integral component of corruption prevention and conflict-of-interest systems around the world, and they are enshrined as such in the UN Convention Against Corruption.

According to World Bank studies, 8 out of 10 high-income countries have already allowed public access to data contained in civil servants’ asset declarations. 60% of countries that have rendered such information open are also disclosing declared assets for officials’ spouses or life partners. In 85% of countries where an asset declaration system is in place for heads of state, ministers as well as rank and file civil servants, officials are also openly disclosing information on movable assets and cash savings.

In September 2015, the Government of Ukraine appealed to UNDP with a request to provide technical and financial support in developing an electronic asset declaration software in line with the new legislative requirements. As the National Agency for Corruption Prevention (NACP) had not been established by that time, the Ministry of Justice served as the lead agency for the Government of Ukraine in this matter.

UNDP subsequently ran an open and competitive tender for these works and fulfilled the request as asked, fully involving the newly-created NACP in all procedural steps; on 27 July, a software system for filing, publishing and storing officials’ declarations—fully functional and fully tested to be in line with Ukrainian legislation and the NACP’s own regulations—was transferred to the NACP as the system’s rightful Ukrainian owner.

Global experience shows that introducing paradigm shifts that suddenly and fundamentally change entrenched patterns of corruption, collusion and abuse of state power is fraught with challenges and bound to meet obstacles. The preparation and launch of Ukraine’s electronic declaration system is one of many examples for that.

Obviously, there are many who would rather not allow the public to know about their assets, and not always for legitimate reasons. And yet for public institutions and officials to regain genuine trust and to rebuild the social contract between the state and the people it may be essential to redraw the rules of the game.

Indeed, for anyone with control and influence over budget funds – which are to serve the general public rather than private interests – it is necessary to accept a degree of public oversight that must be balanced with their right to privacy.

It should also be said that the responsibility to prevent and fight corruption does not only lie with state officials, many of whom are expected to make do with meagre salaries and little prospect of raising their standards of living. Rather, what is now expected of state employees must set new standards of propriety and integrity all across society, one that is based on fair rules applicable to all rather than favours accessible to a few.

Ukraine now has a new asset declaration system that is far from perfect, bit it is still a huge improvement to the old paper-based system. The system in place has been fully in the hands of government bodies and has received all required technical and legal approvals.

As UNDP had contributed key elements of an earlier version of the software, we have been following the recent developments with great interest and some concern. Over the past weeks, it has become clear that there are significant differences between the original product delivered to NACP by UNDP and the currently operational software system. Some observers have even suggested that the currently operational online asset declaration forms may not be fully in line with the NACP’s own regulations and the Law of Ukraine “On Preventing Corruption”. We believe that there is still time for such inconsistencies to be addressed, if the system is to be considered robust and trustworthy.

Another cause for concern is that currently—two weeks prior to the submission deadline—only about 10% of the declarants have filed their online declarations. We are unsure whether this is due to lack of awareness of hesitation, but we expect that a massive last-minute run on the system could lead to a technical overload that would go beyond its current capabilities and therefore encourage all prospective declarants to submit their entries as soon as possible.

UNDP believes that the effective functioning of an e-declaration system, a cornerstone of Ukraine’s anti-corruption reforms, will be a watershed for the country. Ukraine’s international friends and partners rightly encourage it to take this decisive step towards better governance. UNDP has reconfirmed its readiness to assist national counterparts in translating commitments into realities, including by tackling the existing challenges with regard to the electronic declaration regime.

Despite the setbacks to be expected along the road, an effective asset declaration system that enjoys the trust of the Ukrainian people will be built, and it will allow Ukraine to move into a new era where corruption is an exception rather than the rule, and where public officials and civil servants are respected for serving the general public, rather than their own personal interests.

Anti-corruption justice and collaboration in Kosovo: Challenges and recommendations