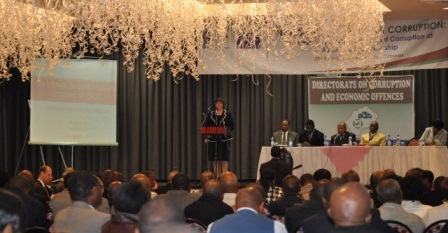 The Directorate on Corruption and Economic Offences (DCEO) held its first ever national dialogue on corruption involving about 250 stakeholders drawn from all key sectors; public, private, academia, civil society and the media, in Maseru, Lesotho 23 – 25 July, 2013. The dialogue sought to explore and formulate ways of tackling corrupt practices. The event was jointly funded by both the UNDP, the American Embassy in Lesotho and the Delegation of the European Union in Lesotho. The national dialogue was officially opened by the right Honourable Prime Minister of Lesotho Thomas Motsoahae Thabane. A full Cabinet and a college of principal secretaries attended the opening.

In his key note address, the Prime Minister Dr Motsoahae Thabane urged the public to blow the whistle on corrupt individuals abusing the country’s resources. “We may pass all sorts laws to support the fight against corruption, but the best solution is to get rid of corrupt individuals among us, because they do not belong among us. They suck our blood and leave us lifeless. Corruption is the biggest enemy of our country more so than HIV/AIDS. We have successfully fought against HIV/AIDS which used to be our biggest threat. Now let us work together again to fight and defeat corruption,”
The Prime Minister blamed Lesotho’s status as the least-developed country on corruption, particularly in the public sector, and not necessarily because of lack of economic resources. “Our LDC status is maintained by corruption, and this is simply because we are misusing our national resources and not because we do not have enough of them.”
Speaking at the same occasion, the United Nations Development Programme (UNDP) Resident Representative Karla Robin Hershey expressed profound gratitude to the US Government and the delegation of the European Union for providing technical and financial support for the dialogue. She also commended the Government of Lesotho for taking the initiative to hold a multi-stakeholder dialogue on corruption in an endeavor to agree on concerted efforts and strategies to combat “this endemic problem. This demonstrates a clear commitment by the government and people of Lesotho to join hands and uproot corruption.”

The Purpose and objectives of the National Dialogue on Corruption

The main purpose of the national dialogue on corruption was to afford the stakeholders to confront and interrogate the phenomenon of corruption in detail, and explore possible strategies to tackling it. This was to be done through sensitization of leadership structures at all levels hence the theme “Harnessing Political Will to Fight Corruption at all Levels of Leadership.”

The dialogue was officially closed by the Deputy Prime Minister Mothejoa Metsing who reiterated the need for the country to unite and fight corruption. The second phase of this initiative will involve the development of a national strategy to combating corruption as resolutions of the June 23-25 conference are crafted together to produce a national strategy.