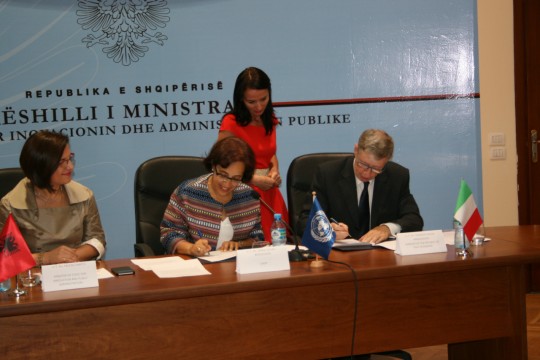 On July 14th 2015, UNDP and the Government of Italy signed a cost sharing agreement which aims to improve service delivery for the citizens of Albania. This intervention is part of the Government of Albania’s project: “Innovation against Corruption: Building a Citizen Centric Service Delivery Model in Albania” (ISDA) implemented under the leadership of the Minister of State for Innovation and Public Administration.Funding from the Government of Italy, through UNDP, amounts to 265,000 EUR. Another funding of USD 140.000 has already been provided by UNDP.

The project supports the  efforts of the Government of Albania in the area of public administration reform through which the Government is striving to change the way public services are provided, making use of a variety of interventions under a citizen-centric approach to combat corruption, foster a customer-care culture, as well as increase the efficiency of the Albanian public administration.

The project focuses on providing technical assistance, development of a long-term public service delivery strategy and building of the institutional capacities in this area. The project also supports the National Agency for the Delivery of Integrated Services in Albania to become operational and able to oversee the implementation of the service delivery reform. UNDP supports the start-up phases such as developing the framework and building capacities of the Minister of State for Innovation and Public Administration  for the management of the process. Combined with advancements in other key national reform areas including civil service reform, the innovations in public service delivery can fundamentally change how citizens of Albania interact with the state.

UNDP anticipates a larger funding coming from the Worl Bank. This intervention joined today by the Government of Italy, will serve not only as a bridge to the World Bank funding but also supports the establishment of the necessary capacities within the Minister of State for Innovation and Public Administration to manage the challenges posed by this sector.

During the signing ceremony other international partners were called on to join the Government of Italy and the Minister of State for Innovation and Public Administration in pooling their resources to start this reform agenda.

The fight against corruption constitutes one of the five political criteria for Albania’s EU membership. The Government has identified six national strategic priorities, one of which is Innovative Good Governance. At the center of this national priority lies “the citizen-centered service delivery” which is the catch all phrase and approach of the Government towards increasing quality and accountability of public services.

Financing for transformation: from agenda to action on sustainable development in Asia and the Pacific