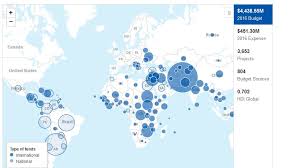 The United Nations Development Programme (UNDP) remains the most transparent aid organisation in the world, according to a leading global ranking released today.

It is the second consecutive year that the UNDP has been ranked first in the index, which assesses the state of aid transparency among the world’s major donor organisations.

The index is based on the International Aid Transparency Initiative (IATI) standard, which sets a common global benchmark for publishing timely, forward-looking and comprehensive aid information.

“We are thrilled to be recognised for our commitment to transparency, which is at the core of our mission,” said Helen Clark, UNDP Administrator.

“UNDP was proud to be ranked number one during the last index, and our commitment to raising the bar has certainly not wavered since. We have continued to improve the way we report our data and are now able to share information on where our interventions are having an impact,” Helen Clark said.

“The developing countries we serve have a right to know how development funding is being used in their countries. All those who place funding through UNDP are also entitled to know how we are handling the monies entrusted to us.”

Currently 397 organisations are publishing information to the IATI Standard, including donor countries, multilateral organisations, foundations, private sector and national and international NGOs. More than 25 developing countries have endorsed the initiative and are active members in its governance.

“We congratulate UNDP for topping the Aid Transparency Index for the second time in a row. UNDP has become a leader in aid transparency and is setting a high bar for others to follow,” said Rupert Simons, CEO of Publish What You Fund.

As an original IATI signatory, UNDP began publishing to the global standard in 2011. Since then, it has consistently met international transparency standards, operating an innovative portal (open.undp.org) that details more than 5,000 of its development projects.