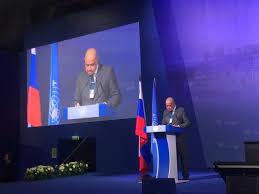 Pacific delegates to the Conference of State Parties (CoSP) in St. Petersburg, the Russian Federation, have had their strong call for Pacific recognition in the UN Convention Against Corruption (UNCAC) deliberations agreed to this week.

“Hard work by all the Pacific delegates saw a motion sponsored by Fiji and Nauru to recognize Small Island Developing States (SIDS) agreed to unanimously,” said Cook Islands Head of Delegation and Minister for Justice, Hon. Nandi Glassie at the CoSP, which had over 1,500 participants in attendance from 164 countries.

Eleven Pacific Island Countries were represented at CoSP with many representatives making strong calls for renewed anti-corruption efforts and programmes throughout the Pacific.

The SIDS resolution, ‘Strengthening the Implementation of UNCAC in SIDS’, recalled the SIDS Accelerated Modalities of Action (SAMOA) Pathway, which was the outcome statement of the third International Conference on SIDS, hosted in Samoa in September 2014.

States parties and other interested donors with relevant expertise applicable to the contexts of SIDS are also encouraged, upon request, to share their best practices with SIDS through existing and future bilateral, regional and international cooperation mechanisms.

“We acknowledge the assistance of UNODC, UNDP and the United Nations Pacific Regional Anti-corruption (UN-PRAC) Project and the Global Organisation of Parliamentarians Against Corruption (GOPAC) for their initiatives in the Pacific which has resulted in the big Pacific contingent being present and participating strongly at this Conference,” Minister Glassie told the CoSP plenary meeting.

Minister Glassie also spoke at a special side event at CoSP, “Anti-corruption in SIDS: What is there? And what else is needed?”, which addressed anti-corruption officials from small islands in the Caribbean, Indian Ocean and Pacific regions, together with technical assistance providers, to elaborate on national progress and remaining challenges to anti-corruption reform, and suggested priorities.

Parliamentarians meet at the UNCAC Conference in St. Petersburg to mobilize best practices