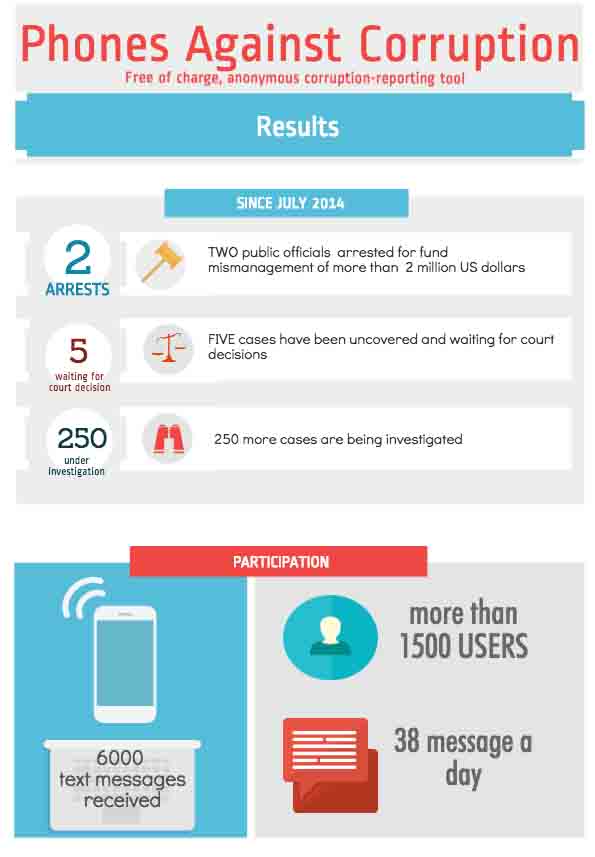 Two public officials in Papua New Guinea have been arrested for fund mismanagement of more than 2 million US dollars. Five more are waiting for court decisions, and approximately other 250 cases are being investigated.

Revelation of these perceived corrupt practices was made possible through the new “Phones Against Corruption” initiative, launched by UNDP in partnership with PNG’s Department of Finance in 2014.

The success is significant to Papua New Guinea, where corruption severely impacts and derails country’s development. PNG features 144th out of 175 in Transparency International’s Corruption Index and is in the lowest 15% of countries dealing with corruption according to the World Bank’s Global Governance Corruption Index.

This pilot initiative introduced new corruption reporting tool – text messaging through mobile phones. The text messaging is user friendly and is free of charge, with no specific application or Internet access required. It is anonymous – it does not report sender’s information. Required information relates to Where, When and What corruption case is being reported.

All reported cases are referred to the Department of Finance through the Internal Audit and Compliance Division for further investigation in collaboration with relevant state bodies responsible for criminal investigations and prosecution.

“We as Department of Finance are accountable of public money that are going to the different sectors, provinces and districts, and this initiative will help us, at least, to minimize the risk of corruption in the management of public funds”, said Acting DOF Secretary Dr. Ken Ngangan.

“Having singular approaches to addressing anti-corruption is not enough: we have to take a much more innovative and integrated approach. Through “Phones against Corruption” initiative we want to make sure that all Papua New Guineans – for the first time – will have an opportunity to report on corruption cases that they encounter and improve current practices”, said Roy Trivedy, the UNDP Resident Representative.

The initiative is initially introduced among 1200 staff of the Department of Finance. Since its launch in July last year, more than 6 000 text messages have been received from 1500 different users, averaging 38 messages per day.

The “Phones Against Corruption” initiative is led by Department of Finance through UNDP’s Provincial Capacity Building Programme. This pilot initiative is funded by UNDP’s regional innovation fund in close collaboration with its Corporate Innovation Facility supported by DANIDA. The project also received support from the Australian Government. Now the pilot initiative is going through user-experience review, which will allow to gather users experiences related to common issues and optimize the final product.

The project is ready for scaling up at the national level. Department of Finance will handover this responsibility to the PNG’s Independent Commission Against Corruption in late 2015. In partnership with UNDP, the initiative will be opened to the general public.

Workshop on Corruption Risks and Anti-Corruption Strategies in Climate Aid