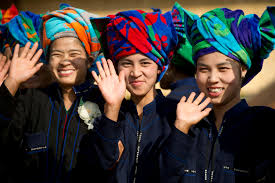 The International Anti-Corruption Conference is the world’s premier global forum that brings together heads of state, civil society, the private sector, academics and others to tackle the increasingly sophisticated challenges posed by corruption. The IACC takes place every two years in a different region of the world and attracts up to 2000 participants.

Vani Catanasiga, from Fiji, said that as a representative of a grassroots group made up of youths advocating for Free, Prior and Informed Consent (FPIC)—the principle that a community has the right to give or withhold its consent to proposed projects that might affect the lands they customarily own or occupy, particularly in the face of increased extractive activities—the sessions on the Extractive Industries Transparency Initiative or EITI were everything she had hoped it would be and even better.

She enjoyed the practical experiences shared by the speakers, built some great contacts and thought the reading materials complemented the sessions well. Upon returning from the 16IACC, Vani convened a meeting with her youth group to share her experiences and stories.

MPs from the Pacific Island countries, including three GOPAC Pacific Chapters and the Anti-Corruption Standing Committee of the Kingdom of Tonga, facilitated a successful session titled, Partnership to Curtail Corruption in the Pacific that consisted of MPs from Cook Islands, Fiji, Tuvalu, Tonga. This was an opportunity to showcase the partnership of the United Nations Development Programme (UNDP), United Nations Office on Drugs and Crime (UNODC), GOPAC Oceania, and Members of Parliament in the Pacific region.

The Global GOPAC Conference is a premier event in the anti-corruption calendar that brings together current and former legislators, government officials, international organizations and anti-corruption advocates from around the world to discuss key issues on the global fight against corruption, focusing on the role of Parliamentarians.

At the Conference, Tonga’s Member of Parliament and Anti-Corruption Standing Committee Chair, Lord Fusitu’a, promoted the work of the Tongan Youth Against Corruption network through a video produced by the youth that highlighted their work in-country (grassroots to Parliament) as a build up to the participation of two of their representatives at the 16IACC.

Partnership to Curtail Corruption in the Pacific

During the Partnership to Curtail Corruption in the Pacific by UNODC, UNDP, and GOPAC Oceania under the UN-PRAC Project session at the GOPAC world conference, Tongan parliamentarian Lord Fusitu’a directly linked capacity building and UNODC/UNDP assistance to the establishment of the Pacific’s first Standing Committee on Anti-Corruption, in the Parliament of Tonga.

“Direct workshops and training for MPs by UN-PRAC, in concert with UNCAC awareness in Tonga for youth, civil society, media and the private sector, saw the standing committee plus a GOPAC Tonga chapter established with a mandate to appoint an Anti-Corruption Commissioner post which has been vacant for nine years and progress signing on to UNCAC,” said Lord Fusitu’a.

Tuvalu’s only woman MP, Puakena Boreham, said her involvement along with her Speaker at the GOPAC/UN-PRAC regional workshop in Suva, Fiji in July and now in Indonesia had given her the tools to progress a select committee on anti-corruption, now that Tuvalu had finally signed onto UNCAC.

GOPAC Cook Islands chair Minister Nandi Glassie said that the GOPAC/UN-PRAC partnership in the Pacific was vital so as new and re-elected MPs could effectively oversight the Cooks’ commitments under UNCAC.

Other Pacific parliamentarians and government officials from Fiji and Kiribati also contributed during the three day conference, with UNODC’s Pacific Annika Wythes presenting in a further session, “Stop stealing from us: tools and mechanism to build anti-corruption prevention system”. 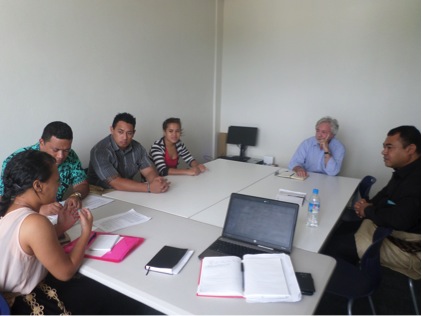 Meeting Mateni Tapueluelu (an MP) who linked the youth with the Anticorruption Committee in Parliament.

Three youths from Tonga, Kaufononga Pulu, Lineti Latu and Tevita Vaha’i participated in the Pacific Youth Forum Against Corruption hosted by UNDP and the Pacific Youth Council through the support of the UN-PRAC Project.

Immediately following the youth forum, the youths started a campaign called GOSH Don’t C.R.Y (Corruption Robs Youth) where they collected evidence of youth from various backgrounds who were affected by corruption. The data collection was called ‘A Thousand Stories.’ With the on-going collection of stories, youth representatives presented their findings to Parliamentarians, the media, and various civil society organizations.

Recognized by the Chairman for the Anti-Corruption Standing Committee, the youths were invited to present at the committee and there, they formed a partnership between Parliamentarians and youth in the fight against corruption. They are currently undertaking plans to raise awareness nationally, continue the ‘thousand stories’, and also establish partnerships which will help youth and the public at large know how to fight against corruption.

Transparent and accountable judiciary to deliver justice for all